Dr Huchzermeyer consults for fish farmers throughout the southern African region and further abroad. He presents courses on  aspects of fish health to role players in the aquaculture industry, and to aquatic scientists, colleagues and hobbyists. He has published a number of papers on his work with fish and crocodiles. Since 2012 he has been an honorary Research Associate in the Department of Ichthyology and Fisheries Science at Rhodes University, Grahamstown and has been co-presenter of training courses on aquatic animal diseases for veterinarians throughout Africa on behalf of the World Animal Health Organization (OIE) and the Food and Agriculture Organization (FAO) of the United Nations. For many years he has been closely involved with the disease free certification process required for trout ova and koi for export to the EU. Furthermore, he is a Title 50 certifying official for salmonid exports to the USA. Dr Huchzermeyer has recently been involved with FAO in creating awareness amongst African countries and providing training in surveillance for a recently emerged serious virus of tilapia, the tilapia lake virus (TiLV).

Fish pansteatitis project
Dr Huchzermeyer was part of the team of researchers investigating the causes leading to deaths of Kruger National Park crocodiles. Since 2008 the large crocodiles in the pristine Olifants River gorge have been dying from a condition identified as pansteatitis, or inflammation of the fat. The condition is more commonly seen by veterinarians in pet cats fed exclusively on fish diets. Dr. Huchzermeyer has demonstrated that pansteatitis is also prevalent amongst the African sharp tooth catfish in the Olifants River gorge. His research, with coworkers, has shown that catfish and crocodiles suffering from pansteatitis in the Olifants Gorge show similar changes in the fatty acid composition of their adipose tissues. This, and analysis of stable isotopes pointed to alterations in the food web, with both crocodiles and catfish showing a trophic shift consistent with assimilation of abnormally high levels of omega-3 fatty acids following intense fish intake. The consequent depletion of tissue vitamin E provided the trigger for oxidation of assimilated fats within the adipose tissues and resulted in pansteatitis. It is evident that the pansteatitis epidemic was an ecological consequence of nutrient pollution, eutrophication, hydrodynamic change and invasion of the system by an exotic filter feeding fish. Subsequently, Dr Huchzermeyer's research team have applied the same methodology in Lake Loskop, an upstream, severely eutrophic impoundment on the Olifants River where crocodiles have almost been driven to extinction by pansteatitis. Here they found that filter feeding fish assimilate levels of omega-3 fatty acids at levels equal to or higher than those found in oily marine fish species. This explains a high vulnerability to pansteatitis within the filter-feeding guild of fish in Lake Loskop. In contrast to the Olifants Gorge, the cause of tissue vitamin E depletion and the trigger for pansteatitis in Lake Loskop fish was the scavenging, by survivor fish, on rancid remains of fish that succumbed during frequent fish die-offs reported from Lake Loskop 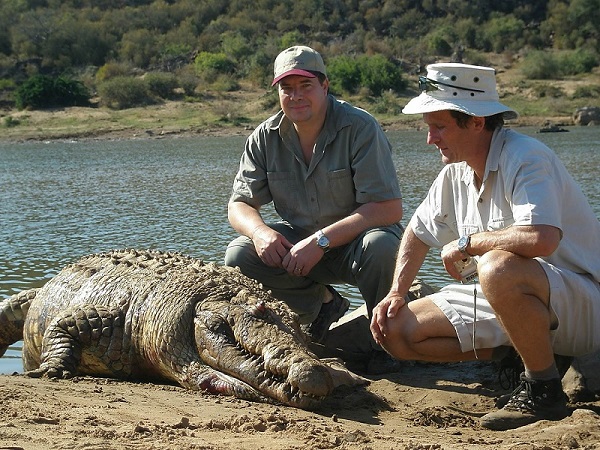 During 2006 an unexplained ulcerative condition was noticed in wild fish in the Chobe River in Botswana. Dr. Huchzermeyer was part of a team asked by the Botswana Government to investigate the cause of this disease. After traveling to the Chobe and collecting specimens from numerous fish Dr. Huchzermeyer was able to confirm this as an outbreak of epizootic ulcerative syndrome, a disease caused by a pathogenic water mould. This much feared disease, which has its origins in the Far East had never before been diagnosed in Africa. How the disease got to southern Africa remains unclear, but importation of live fish used in aquaculture in the region may have played a role. Subsequently the disease has spread into the upper Zambezi River affecting fisheries in Botswana, Namibia, Zambia and Zimbabwe. The biodiversity of some 134 species of freshwater fish as well as the livelihoods of many thousands of people in the catchment area have been put at risk. Since 2014, the headwaters of the Congo River have been affected with seasonal annual outbreaks of EUS reported from the Bangweulu swamps in Northern Zambia. Dr Huchzermeyer was a member of the FAO team that reported the subsequent outbreak of EUS in the north west of the DRC in 2015.